The Blanckaert / Bruls Advocaten law firm provides services to the business community and prides itself on its customer-friendly, no-nonsense approach. 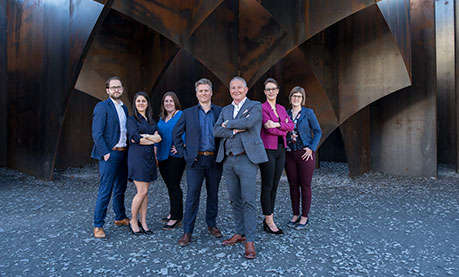 After graduating with a Master of Laws from KU Leuven and obtaining a post-graduate degree in tax law, Bernard Blanckaert joined drinks manufacturer Konings in Zonhoven as a legal and HR manager in 1993. He subsequently held the same position at Limelco, a dairy company in Zonhoven. He was admitted to the Hasselt Bar in 1997 and established his own law firm, Blanckaert & Draye, in 2000. Having previously worked in the business community, Bernard Blanckaert chose to further specialise in services to companies.

After graduating as Master of Laws from KU Leuven, Koen Bruls was admitted to the Brussels Bar as a lawyer in 2000. Five years later, he transferred to the Hasselt Bar and joined Bernard Blanckaert’s firm. Together, they turned Blanckaert & Draye into a major service provider to businesses.

After having worked together for several years, they jointly established the partnership of Blanckaert / Bruls Advocaten in 2016, in which they are both partners. Here, too, the focus is on cases for entrepreneurs and the self-employed. The two lawyers opted for a customer-friendly, no-nonsense approach.  The law firm has broken old habits, choosing instead to make clear price agreements with customers, using plain and simple language, and avoiding long and pointless proceedings. It’s an approach that has proven successful, given the many large companies that have since developed a long-standing partnership with Blanckaert / Bruls Advocaten.

Blanckaert / Bruls Advocaten relies on a close-knit teamof lawyers, highly-skilled paralegals, and administrative employees, so you are assured quick and expert advice. Moreover, the law firm maintains close relations with permanent correspondents, who will help defend your interests with other bar associations in Belgium and abroad.